Does Ghosting Someone Make You a Jerk?

It’s a tale as old as time: Boy meets girl.* Boy likes girl. Boy dates girl for awhile. Boy doesn’t see much future with girl. Boy doesn’t know how to handle it. (I said it was an old story, not a particularly well written one.)

It’s at this point that many of us find ourselves torn between two competing desires: the desire to do the gentlemanly thing and be direct on the one hand, and the desire to take the path of least resistance and avoid a potentially awkward conversation on the other – in other words, to ghost.

And while it’s certainly tempting to just walk away, there are a lot of good reasons why you should suck it up, stand and deliver the truth instead.

In this post you’ll learn when you need to man up and tell them it’s over, and the three questions you MUST ask to determine when it might – might – be OK to simply walk away.

THE CASE AGAINST GHOSTING

When (and Why)
To Say  Goodbye

Honesty may not always be the best policy, but you and I both know that it’s usually better than the alternative. More often than not, both you and your former flame will be best served if you just bite the bullet and tell them it’s over.

The good news is that, awkward though it may be, there are a lot of potential benefits to being upfront.

Getting Comfortable with Discomfort

The old cliché of “letting them down easy” can often be as hard on you as it is on them, and no one likes to have awkward conversations or put themselves in a position to feel uncomfortable.

And that’s exactly why you should do it.

Discomfort is a fact of life. Throughout the years, you’re going to find yourself in awkward social situations, prolonged negotiations and heated debates about Canadian foreign policy (no? just me?). These things often can’t be avoided.

Forcing yourself to have an awkward conversation, even when it could be avoided, trains you to become more comfortable with the feeling of discomfort. That, in turn, makes it easier to deal with the next tense discussion that you can’t avoid.

Nothing to Hide (From) 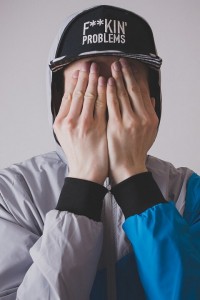 Another reason to man up and have the conversation is that by ghosting, you’re often not avoiding an awkward encounter, just delaying it.

Whether you met your would-be flame through friends, the internet or by pretending to be her husband to help her fend off the aggressive douche who was hitting on her at the bar (I watch a lot of rom coms), chances are this person is only a few degrees removed from you. So unless you plan to pick up everything you own, abandon your life and move across the country, you’re probably going to see them again.

Why not avoid some future situation where you have to hide behind furniture at a bar or continuously avoid eye contact at a party? Being honest now allows you to leave the encounter with your head held high, knowing you have nothing to hide from if (by which of course I mean when) you two bump into each other again.

It’s the Right Thing to Do

And you know it is. Know how I can tell? Because you’re reading this. And if you’re having second thoughts about ghosting, even for a second, it’s probably because you’re the type of guy who wants to do what’s right – even if it’s awkward.

Plus, if you haven’t done so already, you need to consider the other party in this. While ghosting may seem like an easy way out for you, for your former flame, it could feel like being “punched in the gut.” 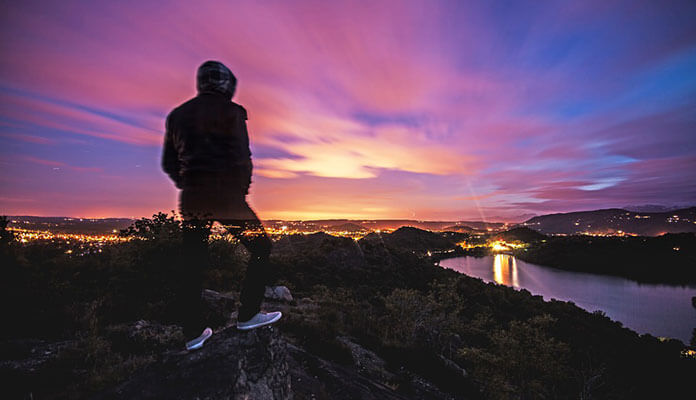 OK, so now that we’ve established why manning up and breaking it off is the right thing to do, in the interest of honesty I have to admit that there may exist some (precious few) situations in which simply walking away is not automatically a dick move.

But before you even consider it, bear in mind this simple – but crucial – ground rule:

Ghosting is only OK if you’ve gone on less than three dates. 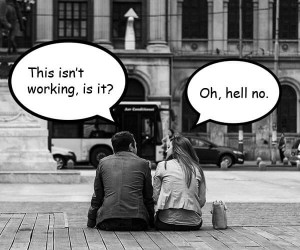 As soon as that third date ends, you two will have invested enough time in each other that the least you can do is say a proper good bye.

OK, so with that rejoinder established, let’s walk through the circumstances in which you can ghost without guilt.

The first few dates are about getting to know each other. Neither of you really owes the other anything at this stage, other than the same politeness and courtesy a gentleman extends to everyone, of course.

If you make a sincere, honest effort to get to know each other but you can sense the mutual recognition that you don’t have much in common, or you just don’t “click,” well, that’s life. Not every date can be magical. 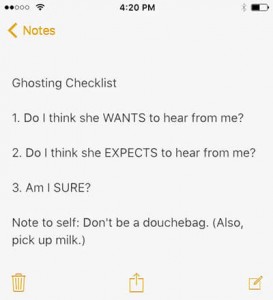 And while it’s tempting to simply leave it at that and declare it safe to walk away explanation-free, it’s not quite that simple. Before you can fade away, you have to ask yourself three questions about the circumstances – and answer them honestly.

1. Based on how your date(s) went, do you think she wants to hear from you again?

After all, it takes two to tango, and if you didn’t feel a spark then there’s a good chance that she didn’t either. Sometimes dates are just noticeably bad or awkward, and when they are, it can be better for both parties to just go their separate ways. BUT…

2. Based on everything you know about her (including how you met, what she’s looking for and your assessment of her level of interest in you), do you think she EXPECTS to hear from you?
2b. How do you think she would she react if she simply never heard from you again?

You may both agree that there’s no future for the two of you, but if you suspect – even for a second – that she might not take kindly to you going dark, then you sir shall not be pulling a Casper.

Remember, it’s not just about whether or not your relationship is going to move forward. It’s also about being a gentleman and treating people with respect.

Even if you feel like a goodbye is unnecessary, you want to make sure that she feels respected. Before you can walk away guilt-free you have to be sure that you won’t offend her in the process. If you get the sense that she’s the type of person who will appreciate an honest goodbye, then give her one.

3. Are you SURE?
3a. Or are you just letting yourself off the hook?

I really can’t stress this enough: awkward conversations suck. Most of us will look for just about any excuse we can find in order to avoid one.

Only you can determine if that’s what you’re doing, and if you are, you’re probably going to regret it later. Before you decide to ghost, spare yourself and your date some future mental anguish by thoroughly questioning your motivations and making sure you feel comfortable with the decision.

The  Ghost  is  Clear

If you’ve answered all three questions and concluded that this really is a situation where you can walk away without hurting anyone’s feelings or setting yourself up for an awkward encounter in the future, then fine. Ghost away.

Just be ready to spend the rest of your life looking over your shoulder for Melissa McCarthy in a jumpsuit.

What do you think? Do you agree with my assessment of ghosting? Weigh in below and let’s get into it.

*A quick note on gender equality: “Boy meets boy” and “boy meets non-gender binary potential mate” are stories just as old as “boy meets girl” (if not quite as common). But when you start to work all the gender-neutral options and phrasing into the text, it can get pretty wordy. I tried to throw in a mix of gender-neutral pronouns above, but for the sake of brevity erred on the side of the feminine pronouns. I hope the LGBTQ2 community will forgive me and know that this was a decision based not in prejudice, just profound laziness. 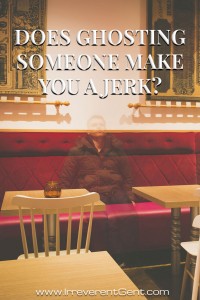 As the founder of Irreverent Gent, Dave shares smart style advice that helps guys look sharp, and smart-ass jokes that make them wish he’d just stick to advice. When not blogging, he loves working out, obsessing over the MCU (#ILoveYou3000) and pretending to know about wine when his wife takes him somewhere fancy.