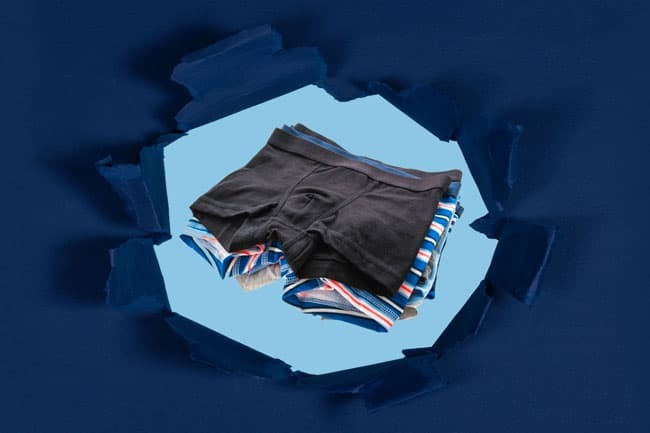 If you spend as much time as I do looking for menswear online (and for the sake of your social life, I really hope you don’t), you might have noticed that the men’s underwear industry has exploded recently.

Over the past few years, it feels like there are dozens – and quite possibly hundreds – of new fashion designers and brands offering mens underwear in all manner of shapes, sizes, variations and colors.

But something funny happens when you look at men’s underwear closely. (Yeah, I heard it. Leaving it in!)

You start to notice that, while there may be all sorts of new models and colors available, there are still really only a small handful of men’s underwear types.

And once you know which of these tend to strike the right balance between sharp style and a comfortable fit, it becomes easy to choose the best type of underwear for you.

In this post I’ll break down the nine most essential mens underwear styles, and help you find the perfect pair to house your – ahem – perfect pair.

The Top 9 Types of Underwear for Men

Of all the different styles of men’s underwear, women tend to consider boxer briefs the most attractive.

For a lot of guys is reason enough to wear them, and probably a big reason why they’re becoming the most popular men’s underwear style.

But they’re also the perfect marriage of form and function.

Boxer briefs provide the same ball-cradling support as briefs, but look much cooler because, like boxers, they have enough fabric to extend down to the top of the inner thigh.

(And some pairs even have a longer leg that hits mid-thigh.)

Unlike boxers, however, with boxer briefs that extra fabric doesn’t flap around loosely and interfere with your pants.

Instead the leg holes have the same amount of stretch as the elastic waistband, which keeps them taut against your thigh.

The result is what many consider to be the single best underwear style for everyday wear, and a great option for guys of any age, shape, size or body type.

Before boxer briefs came along and changed the game, briefs were arguably the most popular type of men’s underwear.

(And they’re still the preferred style of underwear for a lot of older guys, who grew up in those pre-boxer briefs days.)

A good pair of briefs has two main advantages.

First, they provide a snug fit that offers more than a little support, since they wrap quite closely around your crotch—unlike boxers, which flap loosely (and let your junk do the same).

Second, because they use less fabric than boxers, briefs are less likely to leave a noticeable underwear line underneath your pants.

That’s especially important nowadays, when so many of us are wearing slim fit pants that leave little to the imagination.

The only real downside of briefs is that they just don’t look quite as masculine as boxer briefs, which is the main reason why the latter have become so popular.

But they provide just as many advantages in terms of function, which is why a lot of guys still prefer them.

One word of caution though: if you’re going to wear briefs, stick to dark colors like black or navy blue.

The same women who declared boxer briefs the most attractive type of men’s underwear also agreed on which style was the least attractive: tighty whities.

You also want to opt for a sleeker style of low-rise briefs that sits around your hips, rather than up near your belly button.

(If you’re getting Walter White vibes when you look in the mirror, you’re definitely wearing the wrong brief style.)

I used to wear cotton boxers when I was in college, and still have a few pairs in my drawer because I like to sleep in them.

But I cringe whenever I see them getting bunched up in my underwear drawer, because I remember how uncomfortable it was when they would do the same under my jeans.

Fortunately for guys who want to let their manhood hang free, boxers have come a long way.

The best ones let your boys breath without burdening you with too much extra fabric.

As a proud Canadian, I know firsthand that when the cold weather sets in, a good pair of long john underwear becomes an essential piece of a man’s winter wardrobe.

With thermal underwear, the key is to find a pair that fits snugly, so it won’t add any extra bulk to your legs and pants, but will still keep you warm.

And since you’re inevitably going to sweat while wearing a base layer this close to your skin, you also want something that’s moisture wicking and will keep you dry.

The poly-spandex blend in the full-body Thermajohn set below manages to do all three, which is probably why it’s still got 4.6 out of 5 stars on Amazon, even after 23,000 reviews.

As its name implies, pouch underwear comes with an extra bit of fabric in the crotch area, which forms a pouch that provides a tremendous amount of support and comfort to your boys.

You know that uncomfortable feeling when it’s really hot and your balls stick to the side of your leg? Pouch underwear is designed to prevent that.

In addition to being my favorite underwear style, it’s arguably one of the most versatile, since a lot of the other different types of underwear on this list are available with a pouch.

I did a whole round up of the best pouch underwear on the market, but in general you can’t go wrong if you stick to the major players like Saxx and Shinesty.

When I wanted to avoid the bunching that results from the excess fabric of boxers, I switched to boxer briefs.

But some guys go even further in their quest to reduce the amount of excess underwear fabric – by wearing underwear that has as little fabric as physically possible.

G-strings and thongs are basically the closest you can get to going commando while still technically wearing underwear.

Much like string bikinis, they aren’t as popular among men as they are with women (although Borat is one notable exception), but there is a subset of guys who prefer them.

Believe it or not, jock straps aren’t strictly for sports.

In addition to the protective kind worn on the field, you can also get jock straps that have more in common with thongs than athletic equipment.

Jock strap underwear is usually ass-less, consisting of an elastic waist band, a pouch for your junk, two smaller leg bands to wrap around your upper thigh area and…

They don’t use much more fabric than a thong, and arguably leave even less to the imagination, so they take a pretty athletic-looking body shape to pull off.

And while they might not count as certified sports equipment, I have a hunch that most guys who wear them are frequently involved in other kinds of physical activities …

If you want to have a little more fun with your underwear, try typing in “cheeky briefs for men” into Amazon.

There you’ll find a wide range of styles to choose from, including everything from men’s panties to pouch underwear with a little extra padding in the ol’ pouch.

Any of these can be fun for adding a little spice to your underwear game (and possibly your bedroom), but probably won’t work too well for everyday use.

Onesies were the preferred underwear style of men in the 1830s, who famously needed something that was warm enough to sleep in, and flexible enough that they could spring from their beds to see what was the matter, if from the lawn there arose such a clatter.

In terms of practicality, onesies have really been usurped by the kind of two-piece long underwear sets listed above.

But they still have a certain vintage appeal, particular button-up sets like the one below from Duofold, which is basically a long-sleeved henley that just so happens to have pants built right in.

Plus, if you’re not exactly in the best shape of your life, a onesie can be a lot more forgiving than performance-based thermal underwear.

You Know The Best Types of Men’s Underwear

Now learn the best tips for looking polished and put together

Now that you know the most essential types of underwear for men, you’ll have no trouble finding the right pair to keep your boys comfy, safe and supported.

But while wearing one of the best men’s underwear styles can definitely help you feel better, it won’t really help you look any better (at least, not outside the bedroom).

If you want to look your best when you start layering pieces over top of your undies, you need to know how to nail the seemingly small but surprisingly impactful details that add up to make a major impact on your appearance.

That’s why I’ve put together a head-to-toe checklist that outlines the nine details you need to nail, and shows you how to implement them into your look.

And the best part? It’s completely free! Just enter your email address below and I’ll send it straight to your inbox.

Learn How to Look Your Best

The (handsome) devil is in the details.