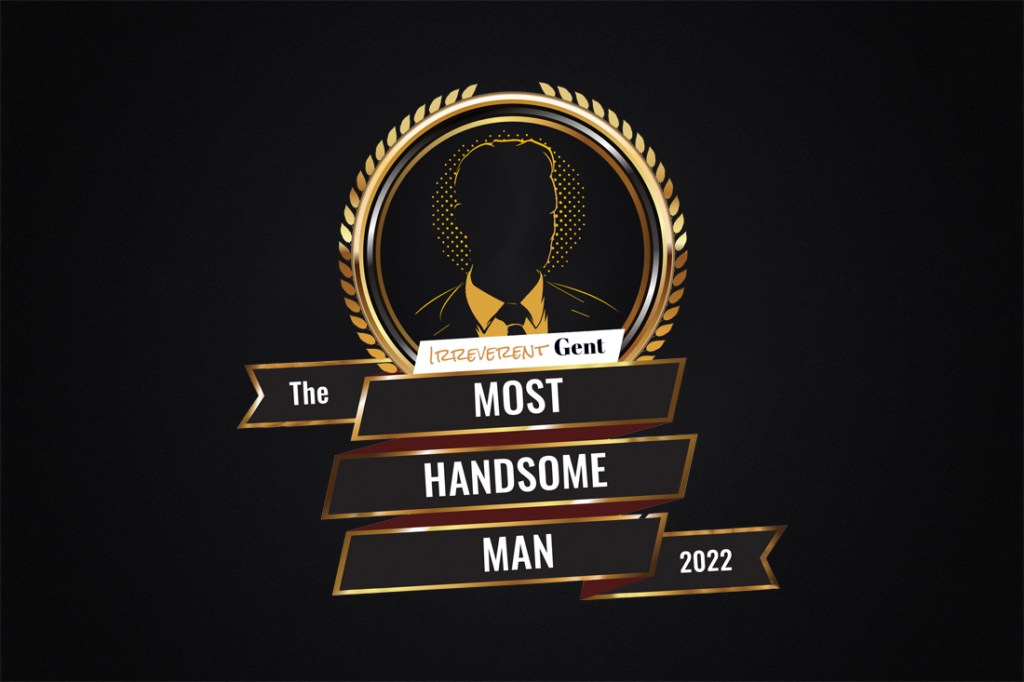 Here at Irreverent Gent we’ve long believed that the handsome devil is in the details.

In our humble opinion, makes a man look handsome and attractive has as much to do with the way he dresses, carries and presents himself as it does with genetics and physical features.

That’s why, in compiling a list of the world ‘s most handsome men, we based our rankings on what we call the Three S’s: Structure, Style and (perhaps most importantly) Swagger.

Structure refers to physical features like a man’s facial structure and body.

Style refers to his clothes, grooming and general self-image.

And Swagger refers to a certain je ne sais quoi.

It’s a little less obvious and harder to define than Structure and Style, because it has to do with the way a man carries himself and the confidence he exudes.

But it’s arguably the single most important factor in determining a man’s handsomeness, and one that’s often overlooked in other lists.

So with our methodology explained, let’s take a look at our choices for the 10 most handsome men in the world in 2022, and find out who earned this year’s title as the overall most handsome man.

Who is the most handsome man in the world?

Breaking Down the Most Handsome Men in the World in 2022

The first of two former Human Flames to crack our top ten, the American actor first joined the ranks of the world’s most handsome men when he got packed on crazy muscle for the title role in Creed.

His acting career has exploded ever since, and next year he’ll be back in fighting shape for Creed III, which also marks his directorial debut.

A golden oldie with a jaw that won’t quit, Pitt stormed back into the ranks of the world’s most attractive men when he took home the best actor award for Once Upon a Time in Hollywood at the last pre-Covid Academy Awards in 2019.

And, more relevantly for this list, revealed that at age 56 he still had a ridiculous set of abs.

He hasn’t racked up any major trophies since, but the Bullet Train star looked great in his most recent action adventure flick (which many consider a Tarantino knock-off), helping him crack our top ten.

British actor Idris Elba was long rumored to take over for Daniel Craig as Bond, and it’s not hard to see why.

In addition to good looks and great style, the actor, DJ and fashion designer has swag for days.

But don’t get your hopes up about seeing him play 007.

In a new interview on HBO’s The Shop, he said, “I feel it is beyond me at this juncture,” and it’s hard to blame him.

Another English actor whose name has come up in discussions of the next James Bond, the man born Robert Douglas Thomas Pattinson apparently has science on his side.

The former Edward Cullen made handsome headlines a few years back when Dr. Julian de Silva, head of the Centre For Advanced Facial Cosmetic and Plastic Surgery in the United Kingdom, declared that his face came closest to physical perfection (at least according to the golden ratio of beauty phi).

We’re no scientists, but anyone who can make Batman look both emo and bad-ass definitely deserves a place on this list.

From Batman to Captain America (and the second Human Torch to grace our list).

Evans showed off a new look – and gave an over-the-top but still outstanding performance – in 2022’s The Gray Man.

His leaned out physical appearance was a far cry from Steve Rogers’s bulging biceps, but his more svelte visage only helped to highlight his ridiculously piercing blue eyes.

Born in Baghdad and raised in Dubai, the Iraqi model isn’t as well known Stateside.

But he’s become a social media sensation – including 1.3 million Insta followers, and counting – thanks to his high cheekbones, facial symmetry and undeniable sense of style.

Another name that’s not as familiar to North Americans, Roshan is an Indian actor whose family is practically Bollywood royalty.

Best known for the Hindi-language film Kaho Naa… Pyaar Hai, Roshan has been a Hindi heartthrob for more than 20 years, and it’s easy to see why.

He’s got the kind of tall, dark and handsome good looks that make him one of the most handsome men in any room he enters.

And speaking of being tall and handsome, Reynolds has been a perennial ever since he got insanely swole to play a vampire hunter way back in 2004’s Blade: Trinity.

Since then he’s gone on to both date and marry some of the most beautiful women in the world, including ex-wife Scarlett Johannsen and current wife Blake Lively, which isn’t surprising considering his damn-near perfect blend of humor, charm, intelligence and business savvy.

The only member of the BTS boy band to crack our list, V is a South Korean singer who hails from the Seo district of Daegu.

All of V’s bandmates have become fashion, music and pop culture icons (they even performed at the Grammy Awards back in 2020, becoming the first Korean act to perform on the show).

But V is arguably the band’s biggest heartthrob thanks to both his unique sense of style and his immense musical talent.

Overall Most Handsome Man in the World 2022 ↓

As we mentioned above, we chose our list based on a mix of facial structure, style and swagger.

And in 2022, no one has more swagger than Billy Eichner.

Vulture first tracked the evolution of his hunkiness way back in 2016, but in our opinion this was the year that Eichner truly came into his own.

In addition to writing, starring in and executive producing Bros, Eichner also happens to look fantastic in it, rocking a perfect combination of great clothes, smart glasses and a haircut that’s perfect for his head shape.

He single-handedly proves that you don’t need Robert Pattinson’s scientifically symmetrical face or Brad Pitt’s ageless abs to be handsome as hell, and easily earns this year’s title as the most handsome man on the whole damn planet.

In addition to being one of Hollywood’s highest-paid actors, the man born Thomas Cruise Mapother IV (you can kind of see why he shortened it for his stage name) is also one of the most handsome.

Cruise got his start as a child actor in the early 80s, but somehow still managed to look youthful in Top Gun: Maverick.

In addition to single-handedly saving the theater business, the 58-year-old actor revealed a remarkably well kept jaw line and that helped him crack our list of the most gorgeous men.

The former striker for Manchester United and Paris Saint-Germain – and current co-owner of Inter Miami CF –  has arguably earned more worldwide recognition for his looks than his athletic career.

And it’s not hard to understand why.

In addition to high cheekbones and perfect hair, he’s got an exceptional sense of style that makes him both one of the most handsome men on the planet, and one of the best dressed.

After being named the Sexiest Man Alive by both People Magazine and The Late Show with Stephen Colbert, hopefully the ageless wonder won’t be too heartbroken to learn that he only got an honorable mention from us.

The man who invented the Bro Flow back in 2017 is still one of Hollywood’s most handsome leading men.

And while acting his still is primary day job, he’ll soon head back behind the camera for Maestro, his directorial follow-up to the 2018 smash-hit A Star is Born.

Clooney got his big break on the television series ER and has been one of the most handsome men in the acting world for decades, so we probably don’t need to explain this one in too much detail.

Instead, here’s your random bit of handsome Hollywood trivia for the day:

Way back before La La Land star Ryan Gosling and James Garner were cast in The Notebook, it was originally going to star George Clooney and Paul Newman in their respective roles.

They scrapped the idea when they realized that Clooney didn’t look anything like Newman, but it’s fun to imagine what that movie might have been like with two Hollywood legends in the mix.

This list is littered with superheroes, but no member of the Justice League has a look as unique as Momoa’s.

HIs flowing locks, ripped muscles and seemingly ever-present smirk make it impossible to take your eyes off him – or his name off our list.

The once and future Wolverine has somehow only gotten handsomer since first debuting as Logan way back in the year 2000, and he’ll soon reprise the role alongside his really dear friend

The once (and future?) Clark Kent narrowly lost out to Robert Pattinson for the title of most scientifically handsome.

According to Dr. de Silva, the British plastic surgeon who declared R.Patt’s face the most symmetrical, Pattinson only narrowly edged out Cavill for the title.

It’s yet another example of Batman beating Superman.

The Blade Runner 2049 and La La Land star – who, as mentioned, nearly lost his breakout role in The Notebook to that George Clooney fucker – is so damn handsome that he was chosen to play Ken in Greta Gerwig’s upcoming Barbie movie.

Between Ryan Reynolds, Ryan Gosling and Justin Trudeau, this just might be a golden age for Canadian handsomeness.

His ongoing feud with his brother – and now next-in-line to the throne – Prince William notwithstanding, Prince Harry has earned his spot on this list.

In addition to his good looks, his willingness to buck tradition and follow his heart to America with his wife and young family took a ton of swagger.

The Most Handsome Man in the World in 2022 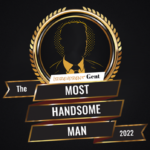 Billy Eichner is the most handsome man in the world in 2022 thanks to his undeniable combination of Structure, Style and Swagger.