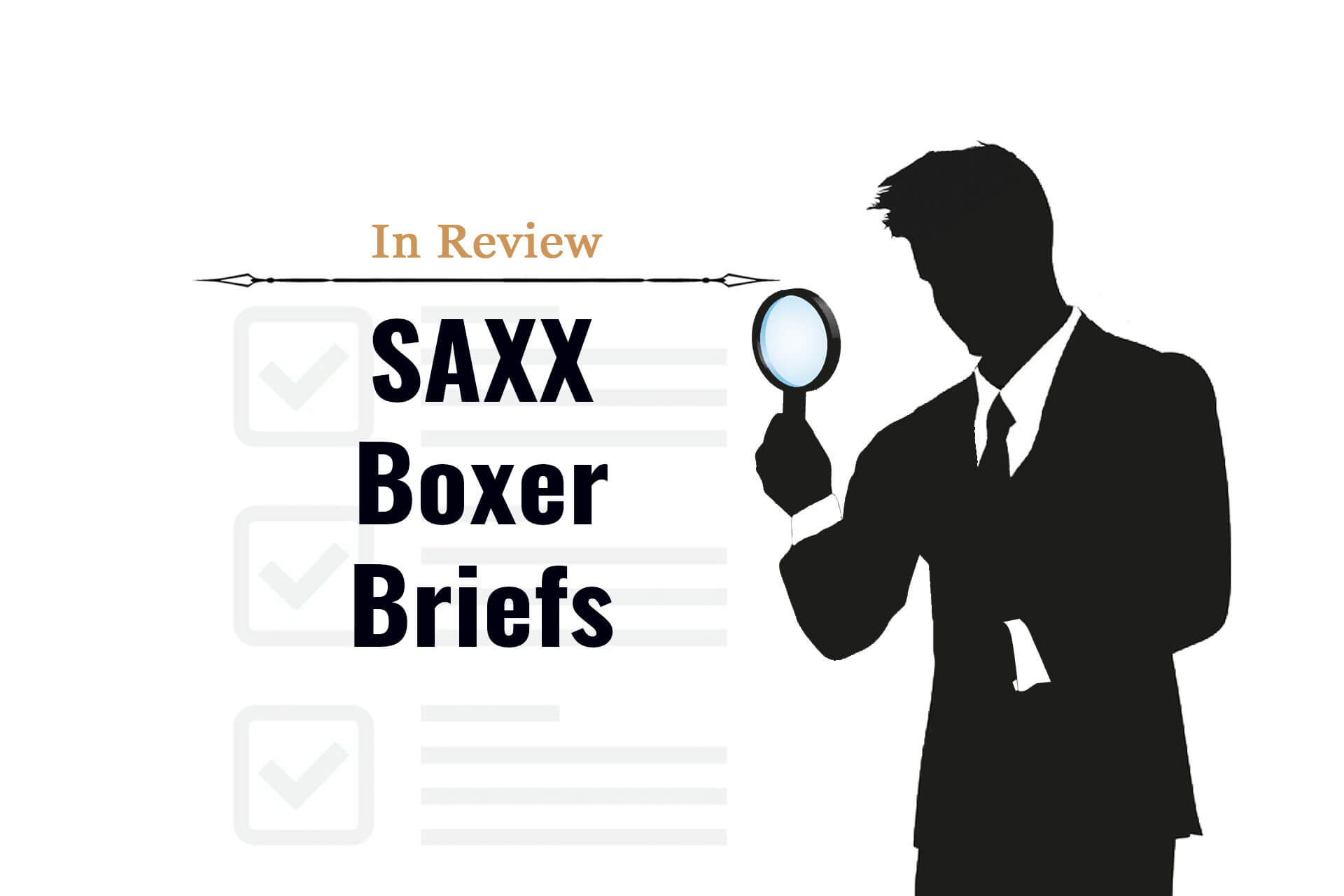 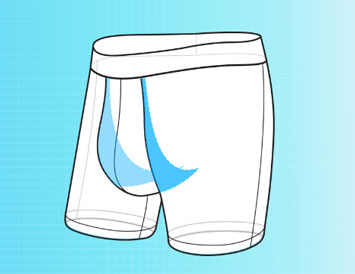 You’ll probably agree with me when I say that, anatomically speaking, most guys face a challenge when it comes to… well, our guys.

As I’ve covered in a previous post, boxer briefs are undoubtedly the best (and most attractive) underwear style for men, thanks to their combination of sleek looks and masculine style.

But in addition to being sleek and stylish, boxer briefs also pose a problem.

A sweaty, deeply uncomfortable problem that often starts in spring and lingers throughout the summer, as temperatures heat up and the summer sun rises, as if raised majestically by Apollo’s fiery chariot…

…well, there’s no point waxing poetic about it: 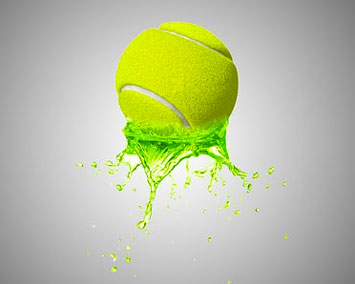 In warmer weather guys tend to sweat a lot more than usual, and if you’re wearing skin-tight underwear, there’s really no where for all that liquid to go.

As a result, it gets sealed in, causing discomfort, rashes, and sometimes even pain.

Saxx boxer briefs feature a dedicated sack – they call it their “ballpark pouch” – meant to separate your boys from the side of your leg, and in theory prevent the itchy, uncomfortable effects of sweat from setting in.

So the questions at hand are:

To answer these questions (well, not the last one), I decided to conduct a thorough Saxx underwear review to find out if their products were up to snuff.

And I do mean thorough:

I’ve had a couple pairs of Saxx in my underwear rotation for more than six months, allowing me to wear them in variety of different situations and temperatures, from July’s summer heat through to January’s freezing depths.

Scroll down to discover the results of my tests, and find out if Saxx are worth shelling out for.

In a bit of serendipity, I had been wearing/testing Saxx for a few months when one of their PR reps reached out to ask if I’d like a free pair.

She didn’t explicitly ask me to write a review, or do anything at all in exchange for the pair, but she almost certainly reached out because she noticed that I’ve written a lot about menswear (and specifically about men’s underwear) before, and hoped that I would mention her product.*

I accepted the Saxx under the same conditions that I accept any product: with NO STRINGS ATTACHED. I took the two pairs I was sent by the PR rep, worked them into my regular rotation, then summarized my honest, unfiltered opinions for this review.

And with that disclosure out of the way, on to the review!

(aka the Underwear [Understandably] Known as “Sacks Underwear”)

I basically conducted two different types of experiments with two different varieties of Saxx. The first style of test involved the Ultra collection.

I own about four or five pairs of Ultras, and I’ve been wearing them once or twice a week for months now.

Switching back and forth between a pair of Saxx one day and a regular pair the next provided me with a strong sense of what distinguished the Saxx from other boxer briefs.

The Everyday Experiment started in late July, at the height of summer, and continued until late January, in the depths of winter, allowing me to find out how the Saxx held up on the farthest ends of the seasonal spectrum.

The second, and arguably tougher, test was in the gym. For this one I wore one of the pairs the Saxx PR rep sent me, from their Volt line.

This test didn’t last quite as long as the Everyday Experiment, but I would estimate that I wore the Volts to the gym at least five times, which provided a large enough sample size to get a good sense of how they perform under pressure. 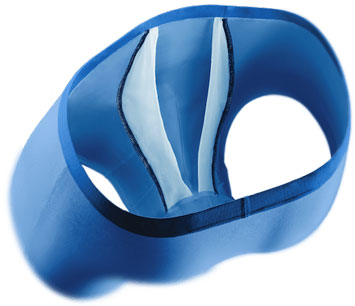 Saxx was one of the first companies to start offering pouch underwear, which is designed to keep your boys from rubbing against your leg.

I don’t mind admitting that when I first found out about this whole concept, I was skeptical.

One of the reasons I switched from boxers to boxer briefs in the first place is because I found the excess fabric that comes with boxers uncomfortable, and I wanted something more streamlined.

When I first learned about the ballpark pouch, I thought that adding extra fabric to the crotch of boxer briefs didn’t seem like a move in the right direction.

Then I tried them on.

The first thing you notice about Saxx is that they do feel a little different than regular boxer briefs, but in a good way.

Your boys feel snug but not stuffy, and protected but not overly clothed. It was a good start.

But the real benefit became clear at the end of that first day.

Without going into too much detail about the state of my nether region, normally by the end of a hot summer’s day, I’m in a perilous state of sweaty grossness.

Not so in the Saxx.

No pair of underwear can change the way my body processes liquid (thanks for nothing, science), so by the end of the day I was still sweating just as much as usual. But unlike most days, there wasn’t even a hint of discomfort.

And I’m happy to report that after repeating the experiment many times, the results didn’t change.

I started to get a little thrill every time I reached into the drawer and pulled out a pair of Saxx, rather than my regular boxer briefs, because I knew that ball sweat was one less thing I had to worry about that day.

Most of pairs of Saxx I own are from their “Ultra” line, which Men’s Health dubbed the world’s best underwear, and after repeated testing during the Everyday Experiment, I have to admit I think they might be right.

The ballpark pouch proved to be a home run. (I said no more sack puns—I said nothing about baseball.)

The pouch was also appreciated in the Gym Experiment.

In the past I’ve found that even performance underwear that’s designed to wick sweat can sometimes do… well, whatever the opposite of wicking is.

In the worst case scenario, performance underwear can sometimes seal moisture in rather than wicking it away, causing an incredibly uncomfortable build up of grossness.

But in the Saxx, this never happened. The material on the Volts was soft and lightweight, and to be perfectly honest I really didn’t notice them at all while I was working out, which is exactly how it should be.

Instead of fretting about my underwear, I was free to fret about my sets and reps.

So under two very different conditions with two different types of Saxx, the ballpark pouch proved to be a huge asset. 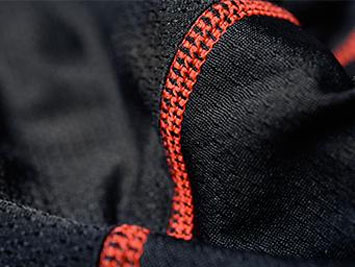 While the pouch is definitely the main draw, the fabrics in the rest of the underwear are also incredibly comfortable.

And I do mean “fabrics” plural. The main thing that distinguishes the different “collections” of Saxx is the fabric used in each type.

As mentioned, I tried the boxer briefs in both the Ultra and Volt “collections” and each one was quite comfortable.

I didn’t try their Kinetic or Quest collections, which seem to be geared the most toward sweat-wicking and athletic performance, but given how well the Volts held up, I have to think those two are equally up to the task.

So while the choice of fabric is obviously up to you, I kind of suspect that you can’t go wrong (though I haven’t tried them all).

There were also a few days where I wore the performance collection, the Volts, in non-athletic situations. Not surprisingly, they were also quite comfortable in everyday situations like at work or out running errands.

But keep in mind that I’m a bit biased here, as I’ve recommended wearing performance underwear in non-performance situations before.

(Especially during the summer, when a two-minute walk in the heat can make me sweat as much as a two-hour workout would.)

The list of cons is pretty short, to be honest.

One is that Saxx come in a wide variety of colorful patterns.

I’ll be the first to admit that this would actually be a plus for a lot of guys, but I’m old school.

Personally, I prefer my briefs in basic colors like black, blue and grey.

Where this particular inclination of mine comes from, I have no idea.

Maybe I just find it hard to imagine that my style icons, guys like Steve McQueen, Neal Caffrey and Daniel Craig’s James Bond, are wearing electric-blue-camouflage briefs underneath their suits.

While most Saxx collections are available in my preferred basic colors, some are only available in various patterns and loud color combos, which aren’t my cup of tea.

It’s a fairly minor quibble (especially since we’re talking about a piece of clothing that’s literally designed not to be seen), but something I noticed.

(Slightly) pricier than other boxer briefs 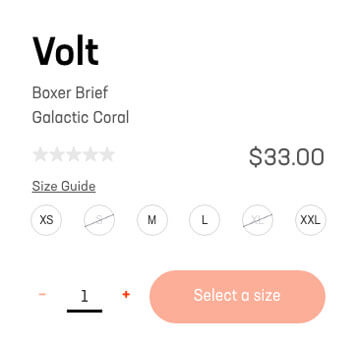 The bigger concern with Saxx is not the colors, but the price tag.

Saxx start at $28 and go as high as $45 for a single pair, which is pretty pricey compared to a lot of other underwear options.

Replacing your entire underwear drawer with Saxx is probably not something you can afford to do overnight, but picking up one of the less expensive pairs as a test case is pretty reasonable.

I’ve always advocated that style isn’t just about looking good, it’s about feeling good, and given its proximity to your most precious asset, your underwear is perhaps the one piece of menswear you want to feel best about.

So while Saxx may be more expensive than other options, if you appreciate the pouch as much as I do, then it’s probably worth shelling out for. 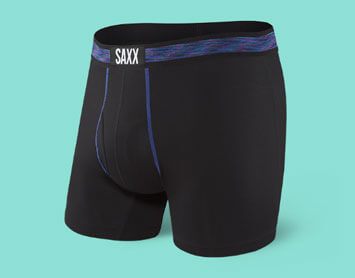 In case it’s not clear by now, overall I strongly recommend Saxx.

While they’re a little pricier than other underwear options, they definitely provide bang for the buck: they look great, feel great, and the ballpark pouch works as advertised.

If sweating is an issue for you, do yourself a favor and pick up a pair. 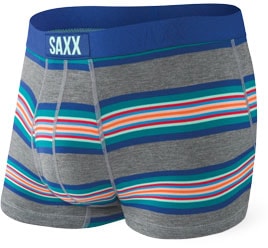 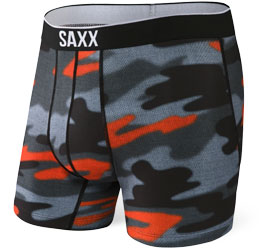 Of course, underwear is only one (unseen) piece of the menswear puzzle.

If you really want to learn how to look great and out-dress the other guys, you need to know how to nail the details—all the details.

Enter your email address below and I’ll send you a checklist outlining the Nine Details You Need to Nail to step up your style and put your best face forward.

More Saxx Reviews From Around the Web: