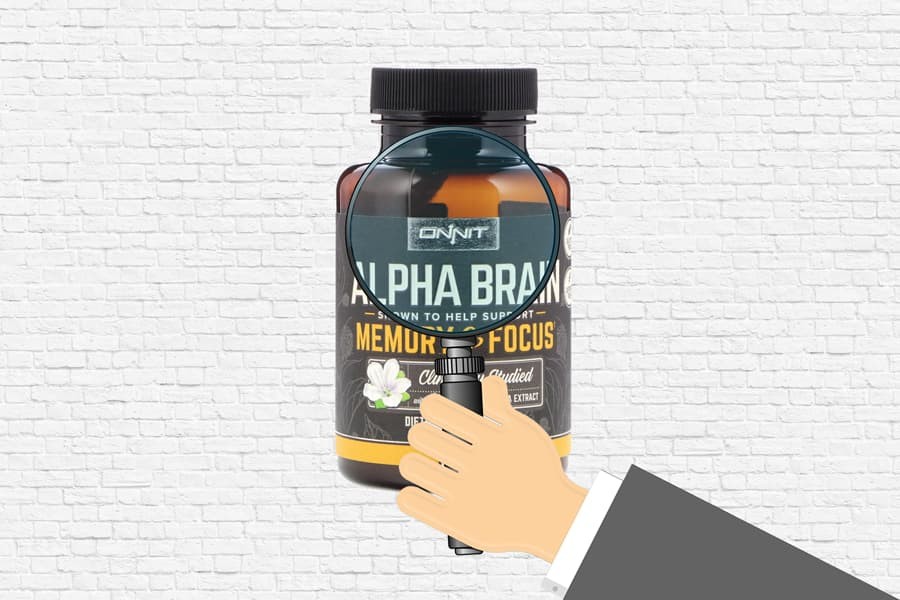 Between social media, video games and our many other excuses for increased screen time, we have arguably more reason than ever to be concerned about our cognitive function.

Both our attention spans and our memories seem to be getting shorter, which has decidedly negative implications on everything from our job performance to our love lives.

And since most of us can’t bear to part with our screens, it’s no surprise that we’ve sought out supplements that might help mitigate our memory-loss and improve our concentration.

The good news is that some real discoveries and genuine scientific advances have led to all sorts of findings that can help us improve our minds.

The bad news is that for every one or two genuine advances, there are legions of frauds, quacks and charlatans pushing all manner of snake oil, and making quasi-medicinal claims that aren’t actually supported by evidence.

I recently spent a few weeks trying Onnit’s Alpha Brain dietary supplement, a nootropic that purports to aid mental processing, promote focus and support memory, to find out if its claims are legit, or full of sh*t.

Read on to learn the full results of my Alpha Brain review and find out if it’s a supplement that’s worth shelling out for.

I am not a medical doctor, biologist, pharmacist, or scientist of any kind. This review is based entirely on my own research and anecdotal experience, and should not be taken as medical advice.

Please consult your doctor before consuming any medicinal product or supplement of any kind.

Overview: What is Alpha Brain?

The Alpha Brain supplement is a nootropic developed by Onnit founder Aubrey Marcus in 2010.

It came to popular attention thanks in large part to Marcus’ friend Joe Rogan, who’s a partner in Onnit and suggested Marcus develop a nootropic.

Nootropics are any form of supplement or medicine that purports to improve your brain’s executive functions.

In Alpha Brain’s case, it does so by producing more neurotransmitters, the chemicals responsible for relaying information in and from the brain.

Fostering the production of neurotransmitters allegedly helps improve your concentration because it can produce more alpha waves.

This makes it easier to fall into what’s called a “flow state,” the phrase coined by psychologist Mihály Csíkszentmihályi.

Flow is the most focused and productive state your mind can be in, during which time you’re effortlessly absorbed by and focused on a given activity, to the point where you don’t even notice how much time passes.

Alpha Brain’s key ingredients are spread out across what they call their three different proprietary blends, each of which claims to serve a different function.

The first is what they call the Onnit Flow Blend which claims to promote alpha wave creation and contains:

The second is called the Onnit Focus Blend, which consists of:

Finally, the third “blend” is called the Onnit Fuel Blend.

But it isn’t a blend so much as it is a single ingredient, L-leucine, a derivative of resveratrol, the plant compound found in grapes that might help fight aging.

In the United States, brain supplements are categorized like other nutritional supplements:

This means that none of the positive effects supplement manufacturers make about their products have to be tested in clinical trials or proven by the Food and Drug administration, and we can’t know for sure if there are widespread negative effects, either.

With that said, while supplements don’t have to go through clinical studies before they can be sold, Alpha Brain has been around long enough that it has been tested in various studies, as have its individual ingredients.

According to WebMD (which may be the three most obnoxious words in the English language), Alpha Brain’s chief ingredient, Alpha GPC, “is possibly safe when used appropriately for up to 6 months.”

But the site goes on to note that:

“It can cause side effects in some people including heartburn, headache, dizziness, and skin rash” and “There isn’t enough reliable information to know if alpha-GPC is safe to use when pregnant or breast-feeding. Stay on the safe side and avoid use.”

So if you’re pregnant or have any other medical condition, you should steer clear entirely.

But, again, even healthy adults should check with their doctor before consuming any supplement or medicine.

My Experience with Alpha Brain

Everything that I’ve explained so far is based on information that you can find for yourself elsewhere online.

But now let’s get into what happened when I actually tried Alpha Brain for my damn myself.

As a blogger, the idea of boosting my brain cells and getting into a flow state appealed to me, because I frequently find myself faced with tasks that require long stretches of sustained concentration, like writing in-depth blog posts.

(And before you roll your eyes, the answer is yes. I realize that there are more complex tasks than finding the best trimmer for shaving your private parts—but I defy you to think of one that requires more concentration.)

I took Alpha Brain at the recommended dosage, consuming two pills a day for 45 days, until the bottle ran out.

It would be too much of a stretch to call the reaction time of Alpha Brain instant, but I was surprised how quickly I started noticing some effects.

It was a lot like when you drink your fist cup of coffee in the morning: it’s not like you’re raring to go after the first sip, but it doesn’t take long before you start to feel something.

In my case, that something was similar to the calmness I feel just after I finish meditating, or when I listen to focus music on YouTube or Spotify.

It’s not like I all of a sudden became a zen master, but about half an hour after popping the pills, I was definitely a little closer to the calm, cool and productive end of the spectrum.

And in some ways it was better than caffeine (my usual brain enhancer of choice), because it didn’t have the same crash or come-down effect that you often get with coffee or energy drinks.

Fortunately I didn’t feel any negative side effects, either right away or after a few weeks of taking it.

I’ve always struggled with sustaining focus and concentration throughout the day.

I’m pretty good in the morning, after a cup of coffee, but then everything from my will power to my ability to concentrate really starts to decline from there.

I took Alpha Brain mid-morning, around 11 o’clock, and noticed a significant improvement in my productivity during the afternoons.

It arguably helped me double my productivity by giving me a second window of focused, concentrated time.

I would wake up, have a cup of coffee, and do some focused work for two or three hours, as normal.

But then right around the time I would normally start to crash, I would take Alpha Brain, eat lunch, and then sit back down at my desk and do another couple hours of focused work.

If someone had been observing me, they might not have noticed any difference in my behavior.

(It’s not like that movie Limitless, where Bradley Cooper takes a brain pill that somehow also inspires him to get a handsome haircut and dress better.)

But the proof was in the output: while I was taking Alpha Brain, I was able to publish about 25-30% more articles than I would in an average 45-day period.

Other People’s Experience with Alpha Brain

As mentioned above, there have actually been some third-party studies of Alpha Brain, which means we don’t’ just have to take Onnit’s word for it when judging its effectiveness.

And the available research suggests that I’m not the only one who benefited from Alpha Brain.

In 2015, a randomized, double-blind, placebo controlled study published in the Journal of the International Society of Sports Nutrition divided 63 healthy adults into two groups; one group received Alpha Brain for six weeks while the other group received a placebo.

The results were unambiguously positive:

“The use of Alpha BRAIN® for 6-weeks significantly improved recent verbal memory and executive function when compared with controls, in a group of healthy adults aged 18-35.”

Much less scientifically, Alpha Brain has been around long enough that thousands of people have now tried it, providing us with a lot of anecdotal data about how it works at scale.

Of the 10,000-plus customer reviews it’s received on Amazon, 73% are five-star, with thousands of users attesting that it’s helped improve various cognitive abilities and mental function, including mental speed, mental clarity, memory function and more.

This collective user experience is anecdotal, but the numbers are large enough to suggest that, by and large, Alpha Brain delivers a positive benefit to many if not most of its users.

The Federal Trade Commission actually sent letters to multiple nootropic manufacturers back in 2019, warning them about potential false advertising and marketing scams.

But it’s worth noting that the warning did not go to Onnit, the maker of Alpha Brain.

Instead, it focused exclusively on companies who were making claims about nootropics’ potential use as a treatment for some very serious diseases, including Alzheimer’s, Parkinson’s, heart disease and even cancer.

No evidence exists to suggest that nootropics can be an effective treatment for those diseases or any others, and Alpha Brain has never claimed to have any effects beyond brain function.

But it’s impossible to talk about nootropics without bringing it up, because the charlatans and snake oil salesmen I mentioned earlier just can’t seem to resist making some ludicrously unfounded claims.

(There’s a special place in hell for anyone who would swindle sick people out of money and sell them a fake cure for a real and devastating disease.)

Based on my own anecdotal experience and the research I’ve done, I have to say yes.

But whether I was tricked into focusing more by a placebo or was legitimately put into a better brain state by the pill, the result was the same:

I felt more focused, had more concentration, and got a lot more done.

If focus, concentration and short-term memory are things you’ve struggled with in the past, then it’s definitely worth giving Alpha Brain a shot.

Onnit is pretty confident that Alpha Brain can help you improve your cognitive function right away, and they’re willing to put their money where their mouth is.

You can use the link below to get a 15-day supply of Alpha Brain for free. All you have to pay for is the shipping, and you can try it for two weeks at no extra cost. 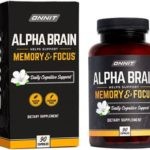 Taking Alpha Brain legitimately helped improve my focus, concentration and productivity, allowing me to get a lot more done during the time that I tried it.