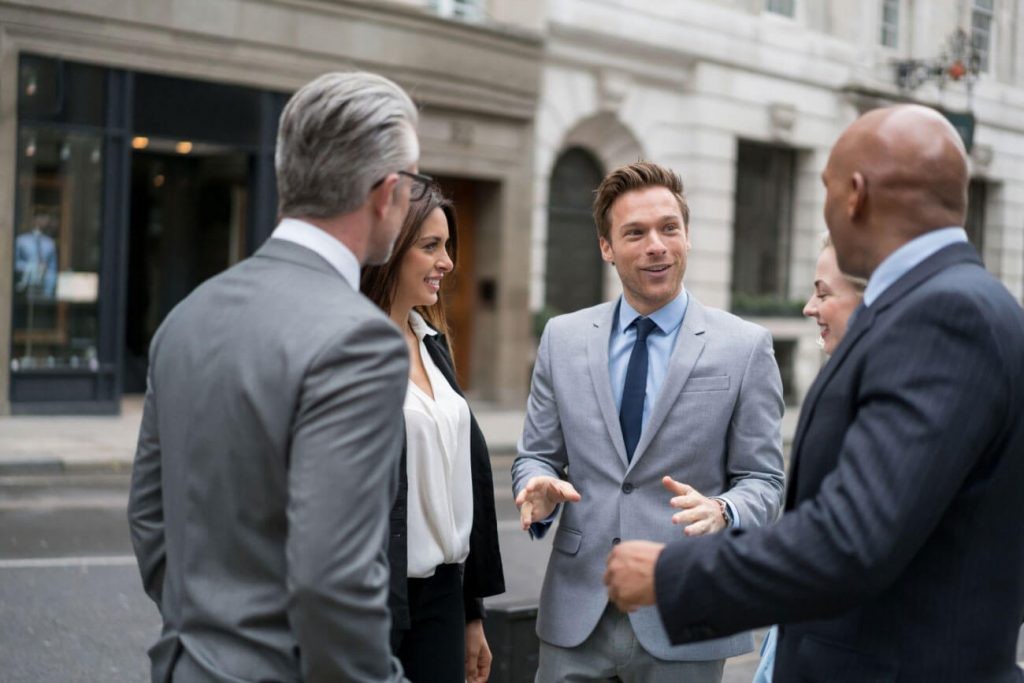 Most guys who want to learn some strong, masculine and effective body language tips are really trying to answer this question:

How do you tell someone that you’re a strong, proud and confident man – a person worth speaking to and hearing from – without uttering a single word?

Of course, one strategy is just to have a t-shirt printed up that says, “I’m a strong, proud and confident man – a person worth speaking to and hearing from.”

But in body language, as in pretty much all things, it’s really better to show than to tell.

Fortunately, there’s a better way to convey confidence, without having to secure the services of a custom printing house.

By using the right body language and carrying yourself with poise, you can immediately convey confidence and advertise your value to people.

In this post we’ll explore what, in my opinion, is by far the most fundamental body language principle—and learn how you can use it to converse with confidence.

3 Tips on Body Language That Will Help You Stand Strong

How to Show You’re a Boss with Body Language

Have you ever surveyed a room and instantly recognized who the leader, the boss, the alpha, was?

You probably know the type of guy I mean. You might have seen him in a coffee shop, around the office, at a party or bar, or even passed him walking down the street.

Just looking at him gives you the impression that he’s a man in command – despite the fact that you actually have no idea who he is or what he does.

How does he so clearly project that kind of confidence? And more importantly, how can you?

Well, dressing better is one obvious answer, but the more fundamental and underlying answer is that no matter what you’re wearing, you can project power by utilizing a proven body language principle that evolution has primed our (surprisingly primal) brains to respect.

Open for Business (and Pleasure)

The main thing that separates shy, defensive and unattractive body language from the kind that’s confident, compelling and powerful is openness.

Confident people tend to open themselves up, spread themselves out and take up space.

Standing with your feet shoulder width apart, your arms at belt level (as opposed to crossed in front of your chest) and your head held high conveys a clear message to other people:

You’re strong, confident and open to what – or who – ever comes your way.

For our ancestors, remaining open and taking up space sent two powerful messages to any potential rivals: “Not only am I large-and-in-charge (as you can see by all the space I take up), but I’m so powerful and unafraid of attack that I can leave my front side exposed.”

In evolutionary terms, it was basically a prehistoric way of saying, “Come at me, brah.”

The reverse is also true: people who are nervous, shy or anxious often sit or stand with their arms crossed, their feet close together and their eyes and head cast down.

This is a defensive position that conveys that you’re closed off and not looking to engage with other people, or be engaged by them.

Now, let’s be clear: power posing with your chest puffed out and your fists at your hips looks pretty boss when Superman does it, but you and I are not the last son of Krypton. (And you’re going to elbow a lot of people in the ribs if you keep your hands glued to your hips while you’re at a bar or party.)

So when considering how to carry ourselves around other people, instead of taking our cues from comic book heroes, let’s take them from confidence heroes.

If you want to look open and confident without feeling like an alien in a blue onesie, but you don’t quite feel comfortable hovering over a table with your arms spread wide like Gosling in that shot above, try stealing a move from another leading man who shot to fame by… well, stealing things.

Check out the shot pictured here of George Clooney, from the poster for Ocean’s 11. See the way he’s adjusting his shirt cuff?

It may look nonchalant, but this is actually a power move that immediately makes you more inclined to like and trust him.

By keeping his hands around his belt line, Clooney’s arms remain in what Mark Bowden (no relation), author of Winning Body Language, calls the Truth Plane.

According to Bowden, the Truth Plane is the horizontal plane that extends across your torso, roughly at the level of your naval. Keeping your hands in this plane and gesturing from within it instantly conveys to people that you’re genuine and can be trusted.

“When the hands gesture within the Truth Plane,” he writes, “an energized calm, confident and balanced effect is felt by both the communicator and the receiver.”

The reason why this works, as Bowden explains, is that the Truth Plane is the place from which you breathe deeply. Keeping your hands here puts you in a more relaxed state, and allows you to project more strongly with your voice and general demeanor.

So by keeping your hands in this plane, you convey to both yourself and anyone within sight of you that you’re calm, cool, collected, and confident (all without needing a custom-printed shirt!).

Now, go back and look at that shot of Clooney one more time. Notice where his hands are? Almost perfectly in line with his navel.

And the good news is that you don’t have to con a shifty casino owner out of millions, hawk Nespresso machines with Danny Devito or make a cool billion on tequila to be able to pull this off.

Any time you’re at a party or anywhere else you have a drink in your hand, you can hold it in the Truth Plane to easily and naturally convey confidence to whoever you’re talking to.

Not drinking? No problem. There are other ways to hold your hands in the Truth Plane without resorting to a hands-on-your-hips (and, again, potential elbow-in-the-ribs) Superman pose.

Mark Bowden often stands with his hands lightly folded just in front of his navel, making him look like a friendly, approachable listener: 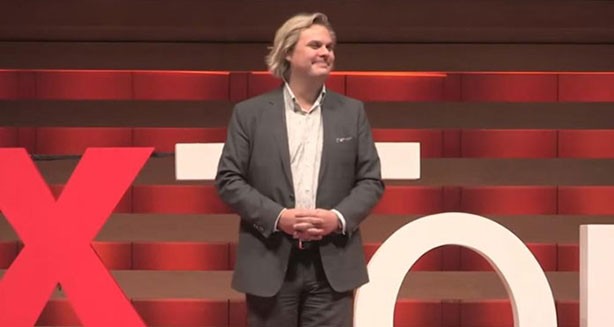 When speaking, Bowden gestures from within the same plane, opening his hands to convey a message and extending them outward from his body when he wants to add emphasis: 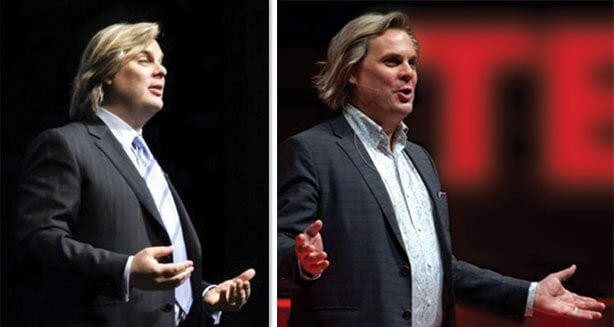 While speaking on stage tends to require slightly larger, more exaggerated gestures than person-to-person conversations, you can borrow the same principle.

Hold your hands in front of your navel while you’re listening in order to feel calm and confident, and convey that confidence to your conversation partner.

Then when it’s your turn, open your palms ever so slightly, and gesture out from your body when you want to add emphasis to a particular point.

A lot of things that worked for our prehistoric ancestors don’t really work for us anymore. (I don’t know about you, but I do a lot more reading-and-watching than hunting-and-gathering.)

So don’t bother striking some large, dominant “alpha male” pose while you’re socializing—odds are that it’ll backfire, and you’ll end up looking dumb, not dominant.

Instead, take a cue from Clooney, Gosling and Bowden:

Take Your Look Next Level

Now that you know the three keys to successful body language, you’re well on your way to projecting the best, most confident version of yourself to the world.

But even though we’ve been told time and time again not to judge a book by its cover, the truth is we do. So while nailing your body language is certainly important, it’s really only one small piece of the overall puzzle that is self-presentation.

If you really want to look sharp and stand out from the crowd, you need to know how to nail the details—all the details. Fortunately, I’ve put together a head-to-toe checklist that will help you ensure that look is as on-point as your body language.

Enter your email address below and I’ll show you the Nine Details You Need to Nail to put your best face forward.