Any guy who’s gone looking for a new pair of boots could be forgiven for feeling overwhelmed by the sheer volume of men’s boots styles on the market.

Each year, usually starting in the fall, menswear brands roll out a ton of new releases, new colors and allegedly new styles.

But when you look closely at the new releases, it doesn’t take long before a clear pattern starts to emerge:

This year’s must-have boots look suspiciously similar to last year’s. And the year before that… And often the decade before that.

That’s because, while it may seem like there are a zillion boot styles for men, the truth is that the vast majority of them fall into the same small handful of tried, true and classic men’s boot styles.

And that’s good news, because once you know which fundamental styles will stand the test of time, choosing the right pair becomes a lot easier.

To help you look your best come boot season, in this post I’ll lay out the sharpest, most classic men’s boot styles on the market, and explain how to get the most out of each one.

Rounding Up the Best Men’s Boots for Everyday Wear

If the handsome devil is in the details (which he most certainly is), then cap toe boots just might be the single most handsome type of men’s ankle boots.

Some would argue that a cap toe isn’t so much a style of boot as a stylish add-on to other boot styles, and technically they’re right.

(You can, after all, find cap toed versions of most of the boot styles listed below.)

But cap toes offer such a distinct and dapper look that, for my money, they deserve their own place on this list.

Whether you’re wearing sleek dress boots with crisply folded dress pants or chunky combat boots with stylish skinny jeans, pair a cap toe with a well shaped toe, and you’ve got a pair of boots that will look sharp in any situation. 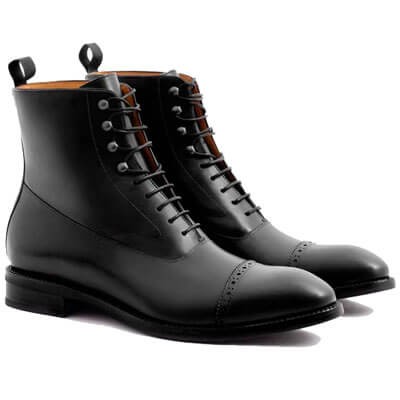 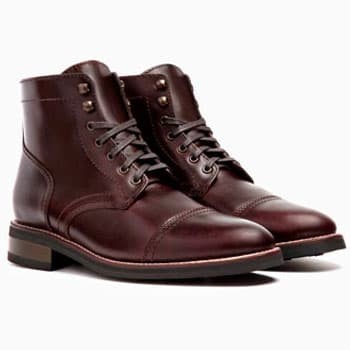 Sometimes the most stylish option is also the simplest.

(Actually, scratch that. Most of the time the most stylish option is also the simplest.)

And chukkas are not only as simple, sleek and stylish as it gets, they’re also one of the most versatile boot styles on this list.

A sleek pair of leather chukkas works well with even the most formal suit, while suede chukkas with a chunky crepe sole are the preferred casual boots of style icons like Steve McQueen and Daniel Craig’s 007.

(But don’t worry: they look just as good on guys who don’t happen to be blonde, fit and roguishly handsome.)

A Couple Chukkas to Try:

Combat boots are easily one of the most bad-ass men’s boot styles.

Modern versions evoke the rugged look of Second World War commandoes, without requiring you to wear the (also cool, but impossible to pull off in real life) WWII-era helmet.

(Interestingly, the name “combat boots” actually goes back much further than that, having first been used to refer to the service boots that British soldiers wore in the Napoleonic wars.)

Combat boots pair perfectly with pretty much any casual outfits, and work especially well in situations that call for denim and hearty upper layers, like heavier types of sweaters or bad-ass leather jackets.

Fortunately, in the increasingly casual world we live in, situations like that come up a lot, making combat boots a more versatile option than you might think.

As mentioned above, you can get most boots in a cap toe style, but I find combat boots in particular benefit from the cap.

Combat boots tend to have a more rounded toe shape (as opposed to the sleeker toes of the chukkas featured above, for example).

As a result, the cap toe provides a stylish element that helps elevate smart casual looks.

A Couple Combat Boots to Try:

Chelsea boots are named after comedian and former Brooklyn Nine-Nine star Chelsea Peretti, who invented them in between shooting seasons 2 and 3 of the show.

Just kidding. (The irony here is that Chelsea Peretti is a hilarious comedian who would probably hate that lame joke.)

In truth, Chelseas get their name from the Chelsea Boot Company, whose origins date back to 19th century Victorian England.

The Chelsea company originated the style of boot that’s since become synonymous with its name, which features an elastic side panel along the ankles that allow the boots to be slipped on and off easily.

Like cap toes, Chelseas can be found in various style.

I personally have a pair of wingtip Chelsea suede boots and a separate, sleeker pair of chocolate brown cap toe Chelseas.

The classic Chelsea has a rounded toe and a thick sole that not only makes them great for any casual situation, but makes it super easy to slide them on and off.

A Couple Chelsea Boots to Try:

Brogues originated with English hunting parties, who trenched through the muddy countryside in search of game.

(The small holes in the leather allowed water to seep out rather than build up in their boots.)

Long a staple of men’s fall fashion, in most climates a well made pair of wingtip boots can stylishly carry you all the way through the colder months of winter.

And that’s especially true if you opt for a pair with hearty rubber soles that can stand up to snow and ice.

But what’s great about brogues is that you don’t have to sacrifice style in the name of practicality.

While classic English gentlemen would have been appalled to see brogues worn indoors, today many people would probably consider wingtips to be dress boots.

(Although, as you’ll read below, I am definitively not one of those people.)

A Couple Wingtip Boots to Try:

Another style of boot that’s admittedly a little vague, I define “dress boot” as any boot that has a sleek toe shape, clean lines, a thin sole and few extra details.

(That’s why wingtip boots are excluded from this category, at least in my humble opinion.)

Chukkas, cap toe boots, derby boots and Jodhpurs could all be considered dress boots if they meet the criteria above.

Dress boots can easily be worn with a suit, but one of my favorite moves is to elevate your casual wear by throwing on a sleek pair of dress boots.

If everyone else is wearing sneakers, round-toe combat boots or Chelseas, a sleek pair of dress boots will be a great choice that helps you make a stylish statement without feeling too peacocky.

One word of warning though:

Since thin leather soles are a key criterion for dress boots, if you live in a colder climate then you should plan to wear them more in the fall and spring than in the winter.

A Couple Dress Boots to Try:

But it does share its name with a city in India, where they originated in the 1920s.

Jodhpurs are distinguished by the high buckle at the top of the boot, which was originally used by polo players to cinch the boots around their ankles.

Today a lot of Jodhpurs just include the buckle for decoration, and actually pull on much like Chelseas.

A Couple Jodhpur Boots to Try:

When it comes to men’s shoes and boots, toe shape is one of the most important factors in determining a pair’s stylishness.

As a rule of thumb, I tend to favor a toe shape that’s somewhere between round and triangular.

As a point of reference, the toe shape on both pairs of Beckett Simonon dress shoes that I reviewed awhile back is pretty much perfect.

But there are a few exceptions to the rule, the biggest of which is probably the moc toe boot, a classic casual staple that gives off a distinctly rough-and-tumble vibe.

Named for their resemblance to moccasins (note the stitching around the squared-off toe), moc toe boots both look and feel masculine.

That makes them a perfect option for guys who want to inject their look with a little ruggedness.

And speaking of ruggedness, nothing says “work hard/play hard” quite like a pair of chunky, thick-soled, comfortable and rugged work boots.

The work boot can be found on both the construction workers who build office towers and the laptop-wielding businessmen who work within them.

In that sense it’s a lot like the denim/chambray shirt, which started as the preferred shirt of working men (and the requisite uniform of many prisoners) before being adopted by the fashionable white collar set.

And it’s not hard to understand work boots’ appeal.

If you work on a construction site or in any industrial environment then the steel boot is probably mandatory.

But even if you don’t, they’re perfect for yard work, shovelling snow, hiking (they’re designed for guys who stand all day, so they’re comfy as hell) and other household duties.

Whether you work hard at a physically demanding task or just want to look like you do, work boots are great to have on hand.

A Couple Work Boots to Try:

You Know the Must Have Boots for Men

Now Take The Next Step Toward Sharp Style

Now that you’ve read the whole post (thanks for hanging in there, by the way), you’ve got a strong understanding of which type of boot you should add to your wardrobe.

But while boots are an important facet of a man’s style, they’re really only one piece of the larger menswear puzzle.

If you really want to learn how look sharp and stand out, you need to know how to nail the details—all the details.

Fortunately, I’ve put together a checklist that will help you do just that. Enter your email address below and I’ll send you the Nine Details You Need to Nail to out-dress the other guys and put your best face forward.

More Advice on Men’s Boots and Shoes from Irreverent Gent:

More Men’s Boots Advice from Around the Web: